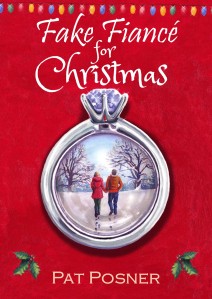 Best friends Flora and Val, will usually do anything for each other.

But Flora refuses to pretend she’s engaged to Val’s brother when Val says it will scotch the rumours about Bryce so their uncle won’t disinherit him.

True, many years ago, as a very young teen, Flora idolised Bryce. She’s learned the hard way to stop doing that, though, and it’s no surprise to her when Bryce ridicules his sister’s idea. But then…

Flora and Bryce discover Val has a desperate reason of her own for needing their pretend engagement. So, for Val’s sake, even though acting as if they even like each other will be hard, they agree to go along with the idea.

They’ll tell their families they want to keep their engagement a secret until after Val’s Christmas wedding so as not to take the limelight away from her.

Because it will only be family who’ll think Flora and Bryce are engaged, breaking it off after Val’s wedding won’t cause any more unwanted publicity for Bryce.

But Christmas is a few weeks away and playing a part to deceive others can sometimes misfire.

Available on Amazon.co.uk and worldwide.

Welcome to Yorkshire and an uplifting world of love and friendship

Comfort reads with a dash of fun