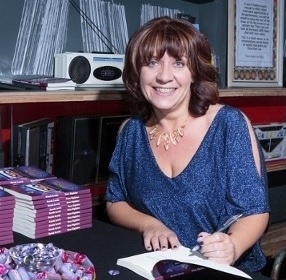 Sarah is a self-confessed obsessive of Eighties culture, and a mine of useless trivia on the decade. With an uncanny knack of bumping into celebrities, the ability to recall in startling detail events from over three decades ago (although likely to forget what she ate for breakfast!), and a number of diaries kept during her childhood and teenage years, no one is better placed to bring you a true taste of the Eighties. Born and raised in The Garden of England, Sarah has lived in Kent all her life. Growing up surrounded by beautiful countryside, but miles from ‘civilisation’, saw her innate interest in music become a lifelong infatuation with radio and vinyl. Entrusted with her parents’ record collection from a young age, she spent hours listening to an eclectic mix of songs from Jim Reeves to The Kinks, Elvis to Sam Cooke, Otis Redding to The Rolling Stones. The latter’s “High Tide And Green Grass” album remains a firm favourite. At 10 years old, Sarah begun her own vinyl collection when she bought her first 7″ single in Woolworths, Adam & The Ants’ “Stand & Deliver”. Today, that now sizeable collection continues to grow with both new releases by 80’s artists and old classics, found in charity shops or received as gifts from friends. Played whenever she feels like taking a break from the radio, her “daily default background music”, Sarah believes her fascination with the Eighties has been compounded by years of exposure to its music, including gigs and retro festivals.

A desire to share her enthusiasm for the decade of her youth, and explore its appeal with fellow 80’s fans led Sarah to set up her blog myeighties.wordpress.com. This was swiftly followed by her first printed publication on the time that subtlety forgot, My Eighties, which includes celebrity interviews alongside her own personal anecdotes and memories. Your Eighties continued the exploration of the decade of extremes, with an array of recollections from some of the era’s biggest fans and best known faces. The third and final book in her trilogy on 80’s popular culture, More Eighties, was published in May 2017. Including contributions from Soft Cell’s David Ball, Heaven 17’s Martyn Ware and The Beat’s Dave Wakeling, it looks at how the decade provided a backdrop in which creativity and individuality flourished, the changing face of the music industry and examines why the era remains a golden age for so many of us.

In November 2016, Sarah released The 80’s Annual, a full-colour retrospective of the year, with more than a nod to the teenage magazines of the era. It embodies the excitement felt by the generation who grew up receiving an annual at Christmas, and features celebrity commentary on 80’s popular culture, 20 Question interviews, Top Tens, quizzes, puzzles and fiction. She is currently working on The 80’s Annual, vol. II, which will be published at the end of 2017.