One of the greatest sadnesses of my adult life is that my dad never got to meet my children. He would have adored them too. My daughter has his acerbic wit and perfect timing with one liners, and he’d have loved cheering on my son’s prowess on the rugby pitch.

What makes it worse is that my husband also lost his father before the children were born, although they are blessed to have two wonderful grandmothers. I had to accept from the beginning that they were going to miss out on having a grandfather in their lives and that seemed such a shame. Only my maternal grandfather was still alive when I was born, but I remember clearly what is what like to spend time with him. He lived near the seaside and had boxes of shells in his shed, which felt like a treasure trove back then. He was such a kind man with a twinkly smile and he used to tease us by calling us the flippin’ kids, but it was all done with affection. He mastered the art of banter long before it was given a name.

As it turns out, my children didn’t miss out at all, because a granddad came into their

lives unexpectedly. He might not be biologically related to them, but Peter has given them everything I’d imagined a granddad would, and more.  When we first met him, his lovely wife Maureen had just cut his hair. Unfortunately, she forgot to put the guard on the clippers and Peter was left with a reverse Mohican, but he just made a joke about it. I knew from that moment we were going to be friends, but I had no idea how much more he would become. 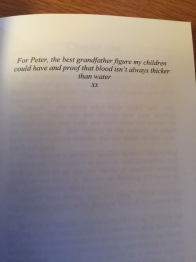 Peter has played endless games with my children, and even in his seventies was still a whizz at Just Dance on the Wii, he helped rebuild the derelict house we bought, accompanied us on trips to see Santa, told the funniest stories and sat through excruciating singing in school concerts.

I often write love stories and, when the protagonists meet, their lives usually change forever. It isn’t just romantic love that can be life changing, though, and sometimes a person can drop into your life who just fits right in, as if they were made to be there.  Peter has been one of those people for my family and so I knew exactly who I wanted to dedicate my latest book, Finding Dad, to.

They say you can choose your friends and not your family, but I don’t think that’s true. Peter and Maureen are the family we chose, whether they like it or not. So if you’re lucky enough to spend this Christmas with a father or grandfather figure, whether they share your DNA or not, make sure you give them an extra hug.  And if you happen to meet a man with a reverse Mohican, it might just be your lucky day.

Finding Dad – When Freya Halliwell sets out to find her biological father, she has no idea what else she’s about to discover.

We are a forward thinking, independent publishing company who publish quality fiction and popular culture books. View all posts by FabrianBooks

...where Kim muses over all things literary.

Contemporary romance from around the world